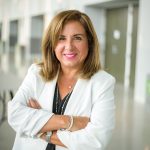 “Today is much more emotional than I expected it to be,” Hudak said. “That emotion comes from a place of love for this city, its residents and my colleagues. I am honored and humbled.”

“Alina is a world-class selection. While it's historic in that she will be our first woman city manager, it's important that our residents know her record of accomplishment is flat-out exceptional,” observed Miami Beach Mayor Dan Gelber.

As county manager, Hudak oversaw more than 27,000 employees and an $8 billion budget. She was involved in planning six Super Bowls and led the Zika response during her time with the county. Since joining the city in February 2020, Hudak has played an important role in Miami Beach’s response to the coronavirus and its resilience efforts.

“I believe very strongly that whenever you start a new job, it doesn’t matter what you’ve accomplished prior to that,” Hudak said. “You have to prove yourself all over again.”

Former City Attorney Raul J. Aguila has been serving as interim city manager since Morales left. The City Commission considered both internal as well as external candidates in searching for a permanent city manager. Hudak will take office immediately and be sworn in on May 12.

“I’m extremely proud of my daughters, my husband and the team that we are as a family unit,” Hudak added. “I think anybody who knows me, knows that my family comes first despite all of my professional dedication and accomplishments.”