Does the Rain Fall Equally on Everyone? by Vindow 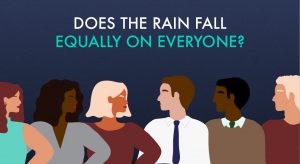 There is an old adage that says, “the rain falls equally on everyone.” While that is true; it’s also true that if you’re already knee-deep in mud when it starts raining, your experience is going to be decidedly more miserable than someone already on firmer ground. Likewise, while the Coronavirus pandemic continues to devastate the globe, it has had a disproportionately negative affect on women’s lives, especially working women.  That is nowhere more evident than in the hospitality sector, where woman comprised 58% of the total workforce.

The Gender Gap. The Pink Tax.

Whatever label you choose, it is a well-documented fact that women have been historically disadvantaged in the workforce in terms of wages, opportunity and advancement.  2020 marked the Centennial anniversary of women earning the right to vote in the United States. Leading up to that landmark achievement, and in the years that followed, significant advancements have been made in gender equality thanks to the sacrifices of brave and outspoken women and men. Yet even today, as the first woman elected Vice President of the United States is sworn into office, challenges and setbacks prevail.

According to the December 2020 Bureau of Labor Statistics (BLS) jobs report, the US economy lost 140,000 net jobs in the month, marking the first month with a decline in new employment since May 2020. 100% of the net jobs lost in December were women’s jobs. Women were reported to account for 156,000 jobs lost that month, while men gained 16,000. In fact, there were nearly 2.1 million fewer women in the labor force in December 2020 than in February, before the pandemic took hold.

She Works Hard for the Money

There is ample research that indicates that everyone benefits when women thrive in the workplace. Studies revealed that companies with women serving on their corporate Board of Directors financially outperform those that do not.  In poorer countries, closing the gender gap has been demonstrated to increase a country’s GDP by as much as 38%.

Women bring different skills into the workforce, which increases overall productivity. Research shows that when companies hire women, the resulting productivity increase exceeds what would be projected solely on a per-person basis by 20%. Higher productivity translates to better wages for both women and men.

As a woman-owned technology company, Vindow strongly encourages policies, directives, and legislation that support and promote women in the workforce, particularly jobs in STEM fields.  At Vindow, we have intentionally strived to make sure that Vindow has women in positions of authority throughout the organization; including Quality Assurance, Development, Marketing and Sales.

According to COO, Andrea Coronel, “I always tell my daughter, ‘never let anyone tell you that you can’t do it. It is very important to recognize and share the value of your unique perspective.’ I don’t think the gender ratios in the workplace are going to change anytime soon. But that doesn’t have to be a disadvantage. Being a woman on a team of all men, means that you are going to have a unique voice. It’s important to embrace that. “

Let this be our Call to Arms

After almost a full year of furloughs, layoffs, and shuttered storefronts due to COVID-19, even the most optimistic among us know that recovery will not be as simple or succinct as, “flipping a switch.” Nonetheless, it’s important that companies plan now for a recovery that is inclusive and egalitarian.  The pandemic has proven to be a Darwinian trial for many businesses and industries. While adaptation is rarely painless, the opportunity to transform the future is before us. Let’s make sure women are well represented in that future.